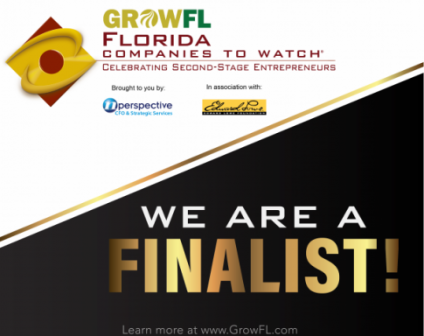 FORT MYERS, Fla. –  D3 Glass has been named among the first round of the 12th Annual GrowFL Florida Companies to Watch Finalists. The award honors impressive second-stage companies from throughout the state for developing valuable products and services, creating quality jobs, enriching communities, and broadening new industries throughout Florida.

“What an honor to be recognized as a GrowFL finalist,” said Bill Daubmann, President and Founder of Fort Myers-based MY Shower Door / D3 Glass. “We have seen continuous growth even during challenging times and I believe it is due to our commitment to our customers and our community, our dedicated team, and our ability to adjust and innovate. We started as a shower door show room and have grown into custom glass manufacturing and installation services across the country. I couldn’t be prouder of our team and their dedication to our clients and the community. Glass magazine just ranked us at #38 of the Top 50 Glaziers in the USA and we are number 1 in the shower door niche. D3 Glass is our primary glass supplier.”

MY Shower Door / D3 glass has won several awards in recent years, consistently standing out because of their state-of-the-art design and quality workmanship. The company started in 2003 as a small showroom and assembly operation in Naples, Fla., later delving into manufacturing by founding D3 Glass in 2013.

D3 Glass continues its explosive growth in glass fabrication and tempering, allowing the company to manufacture its own glass and expand the company brand over the past several years. The company now makes and installs frameless shower doors for nine Florida MY Shower Door locations as well as other glass shops in Florida, other products include bulletproof glass, decorative glass, wine closets, glass staircases, office partitions and other glass products.

Together, the 12th Annual GrowFL Florida Companies to Watch Finalists represent nearly 2,000 jobs and generates over $430 million in revenue. These companies, all of which are “worth watching,” anticipate a growth of 40 percent in revenue and 18 percent in employment by the end of 2022.

The finalists were selected from close to 300 nominations across the state and are now in the running to be named a GrowFL Florida Companies to Watch Honoree. If selected as an Honoree, these exemplary second-stage companies will join the 550 second-stage companies across the state that have been recognized since 2011. In 2013, MY Shower Door was an honoree for this same award and has considerable growth and notoriety from the State of Florida and beyond.

“This group of business owners represents the remarkable second-stage businesses operating across the state of Florida,” said Jennifer Taylor, President, and CEO of GrowFL. “They demonstrate the agility, perseverance and innovation needed to take their business to the next level. GrowFL is proud to support Florida’s second-stage entrepreneurs and help to play a part in recognizing their success. We look forward to celebrating these innovative companies as they continue to grow and have a significant impact on Florida’s economy.”

GrowFL Florida Companies to Watch Finalists represent a unique group of scalable, high-growth enterprises that are already located within Florida. To qualify for the award, companies must have between 6 and 150 employees and revenue between $750,000 and $100 million in 2021.

Companies to Watch was developed by the Edward Lowe Foundation as a unique way to recognize and honor second-stage companies that demonstrate high performance in the marketplace with innovative strategies and processes. In addition to evaluating past growth and projected success, applicant companies are judged according to their special strengths and impact in their markets, communities and within the state – thus deeming them “worth watching.”

The Honorees for this year’s award will be announced in October. The 12th Annual GrowFL Florida Companies to Watch awards celebration will take place on February 23, 2023, at Hard Rock Live, Universal City Walk, Orlando, Fla. For more information, visit https://growfl.com/about-growfl-flctw/

The Daubmanns’ are leaders in their industry and have seen their company grow from the original four founding family members to the current 175 employees throughout the State of Florida, and establishing six affiliate stores in Oklahoma City and Edmond, Okla.; Grand Rapids, Mich.; St. Paul and Minneapolis, Minn., and York, Pa. Learn more about MY Shower Door / D3 Glass at MYShowerDoor.com.

MY Shower Door / D3 Glass
MY Shower Door / D3 Glass is owned by the Daubmann family of Bill and Donna Daubmann along with sons Keith and Doug. MY Shower Door, founded by the Daubmann family in 2003, has grown from 56 employees in 2014 to 175 this year with showrooms in Fort Myers, Cape Coral, Naples (2), Sarasota, Tampa, St. Petersburg, Orlando and Boca Raton. The firm also has affiliate stores in Oklahoma City, Okla.; Edmond, Okla.; Grand Rapids, Mich.; St. Paul and Minneapolis, Minn., and York, Pa. D3 Glass, which started in 2013, continues its explosive growth in glass fabrication and tempering, allowing the company to manufacture its own glass and expand the company brand over the past seven years. Its line of products includes laminated glass, decorative glass, glass stair railing systems, office partitions and wine closets. MY Shower Door / D3 Glass has received local, regional and national recognition for their business accomplishments and products, including the “Business Ambassador” award from then-Gov. Rick Scott and Manufacturer of the Year by Lee County’s Horizon Council and Horizon Foundation distinction. For more information, call Bill Daubmann at 239-596-3255 or visit MYShowerDoor.com.

About  GrowFL
GrowFL is dedicated to support and accelerate the growth of second-stage companies throughout Florida, by providing their leaders focused, efficient, and timely access to resources they deem important, such as connections with other second-stage company leaders, and to professional organizations whose expertise, experience, and products lead to the second-stage company’s continued growth and prosperity resulting in diversification and growth of Florida’s economy.  Second-stage growth companies have at least 6 employees and $750,000 in revenue and possess an intent and desire to grow beyond second-stage.  Website: https://www.growfl.com

About  the Edward Lowe Foundation
The Edward Lowe Foundation was established in 1985 by Ed and Darlene Lowe to leverage entrepreneurship as a strategy for economic growth and community development. The foundation’s entrepreneurship initiatives focus on second-stage companies, which are growth-oriented firms that have moved beyond startup but have not yet reached maturity. Its peer learning, leadership education, and strategic information programs are geared to help these companies continue growing. For more information, visit www.EdwardLowe.org.