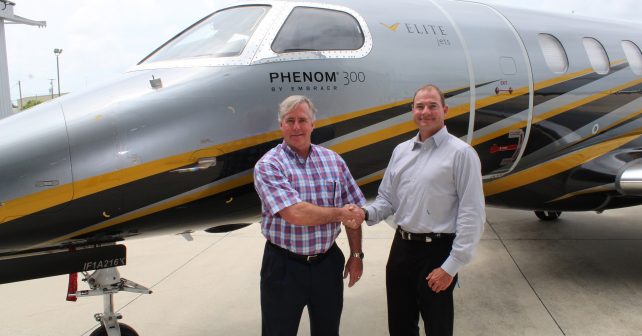 Mark London, who previously served as the company’s general manager, was appointed president and will guide Elite Jets through a period of increased demand from both business and leisure travelers who are opting for more reliable, safe transportation in light of COVID-19.

“Commercial airlines have dramatically decreased their routes and destinations, and private charters like Elite Jets allow passengers to travel from Point A to Point B without flight cancelations, delays or lengthy connections,” London said. “Beyond convenience, private charters also offer an increased comfort level because you aren’t packed onto an airplane with 100 or more passengers, and our jets are thoroughly cleaned and sanitized after each route.”

Prior to his arrival at Elite Jets, London was president of London Aviation Group, which offered helicopter sightseeing tours, flight training, aerial photography and maintenance from its base in Naples. In 1987, London Aviation became the first to base a helicopter at the Naples Airport, and the company later provided support for film crews shooting movies, as well as a team from National Geographic.

Elite Jets also announced Stephen Myers has been promoted from assistant chief pilot to executive vice president, a role in which he’ll oversee operations, including flight scheduling, aircraft maintenance, information technology, sales and marketing. He was born in Naples and is a graduate of Naples High School, and also earned a bachelor’s degree in neuroscience from the University of Florida.

“Stephen’s business experience from owning and managing several technology firms, coupled with his many hours flying Elite Jets’ Phenom 300, makes him a logical fit and should prove fruitful for Elite Jets,” London said.

Elite Jets’ fleet now includes six aircraft: four Phenom 300 jets, one Legacy 500 jet and a Bell 407 helicopter. Earlier this year, the company opened its new 60,000-square-foot private terminal at the Naples Airport to serve a client base that includes seasonal and full-time residents, as well as business executives with second homes in the region.

“Private air travel to and from Southwest Florida has never been easier, and our aircraft are top-of-the-line, newer luxury jets that offer supreme safety features while still providing amenities such as massaging seats, free Wi-Fi and a state-of-the-art entertainment system, as well as being crewed by the top-trained pilots in the industry,” Myers said. “When you fly with Elite Jets, going the extra mile is not an option. It is standard policy.”

London is certified through the Federal Aviation Administration as both a commercial helicopter pilot and flight instructor, while Myers holds FAA certificates as an airline transport pilot and drone pilot.