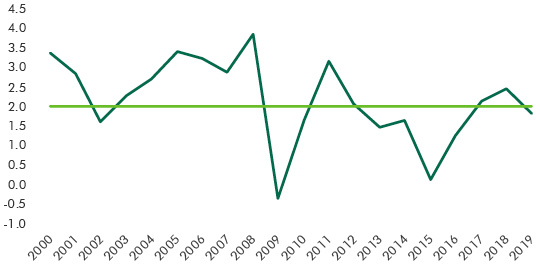 The Federal Reserve announced today that it will allow inflation to run above its target of 2% after times of persistently low inflation before considering rate increases. The policy change is intended to mute concerns that inflationary pressure from government fiscal and monetary stimulus could cause the Fed to raise rates prematurely. Inflation has often been below the Fed’s 2% target for some time.

The Fed’s increased tolerance for some inflation will further bolster the case of “lower for longer” interest rates and put greater downward pressure on long-term cap rate movement. The Fed has already flooded the market with liquidity to lessen COVID-19’s economic impact and this has substantially reduced levels of corporate debt defaults.