The 21 ADDY awards were the most earned by any firm in the local competition, which includes agencies and in-house marketing teams representing the five-county region of Collier, Lee, Charlotte, Hendry and Glades.The American Advertising Awards, or ADDY Awards, is the advertising industry’s largest and most representative competition that recognizes and rewards the creative spirit of excellence in the art of advertising. The three-phase awards program includes local, district and national competitions.

Presented Feb. 20, three of Priority Marketing’s 21 awards were among the event’s highest honors, including:

“The variety of our awards – commercials, promotional videos, collateral design, traditional print advertising, marketing campaigns, website development and photography – is a testament to our team’s versatility and ability to successfully achieve a broad range of desired outcomes for our clients,” said President and Creative Director Teri Hansen, APR. “We’re also pleased to see several of our clients recognized for their work, including Shell Point Retirement Community and the Conservancy of Southwest Florida.”

In 2020, Priority Marketing earned seven ADDY Awards in the Southwest Florida competition, as well as one ADDY through the AAF’s 4th District, which includes Florida and all of the Caribbean. Entries honored at the local level are considered in the district competition. 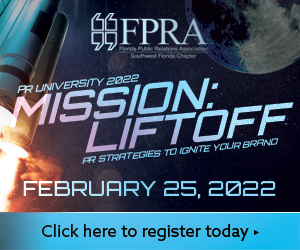